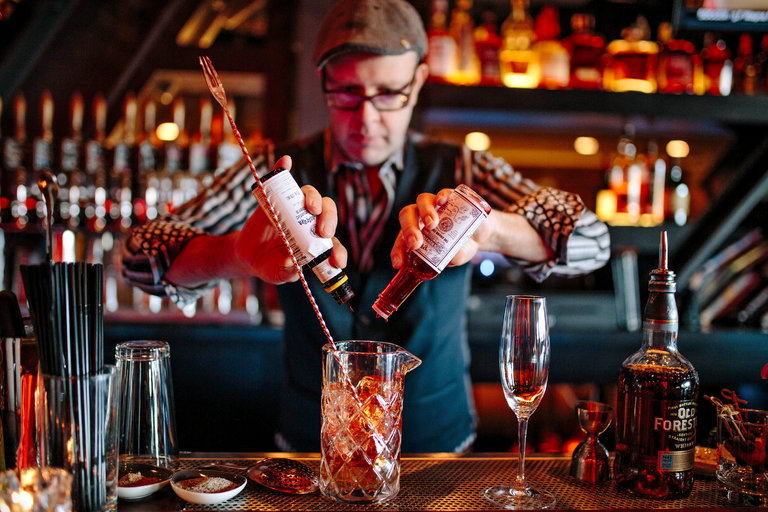 Spinning yarn is a technique public relations agencies have been using for ages. In fact, our NYC PR firm did something similar when giving a bartender in Bangalore, India a rather intriguing name. Adam Seger, head of the Seelbach Hilton’s bar and restaurant operations, has done it, too.

When Mr. Seger started out at the Seelbach Hilton, he wanted to make a name for himself. Since the property, then the Seelbach Hotel, was mentioned in F. Scott Fitzgerald’s novel “The Great Gatsby,” Mr. Seger thought he could accomplish this by uncovering a long-lost Seelbach cocktail.

Unfortunately, Mr. Seger found none at the time Fitzgerald imbibed there. So he made up a story ostensibly taking place in 1912, involving a clumsy bartender and a couple honeymooning at the Seelbach Hotel. According to legend, the server accidently spilled the woman’s Champagne cocktail into the man’s Manhattan, thus creating the Seelbach cocktail.

Everyone believed it and the news media picked up the story. However, as a recent article in the The New York Times’ food section reported, the fable behind this drink was completely fabricated.

“How could you have a place that F. Scott Fitzgerald hung out in that doesn’t have a damn cocktail,” wondered Mr. Seger. I don’t know. That’s why I’m glad there is one now and why I’m hightailing it to Louisville, Kentucky to taste it.

An Intriguing Story Crafted By Our NYC PR Firm

We did something like this when representing The Leela Palace Bangalore in India. While visiting the property, I asked the bartender about their martinis. “Oh, well, madam,” he said. “We actually make over 200 martinis here at The Leela. What would your preference be?”

Even before sipping my cocktail, I came up with the idea of calling this bartender “The Martini Master.”

When I returned to New York, the first thing I did was put out a press release about “The Martini Master” who could make over 200 martinis. The story caught on and went viral. Nearly every cocktail blog and liqueur publication ran it.

Although the tale about “The Martini Master” is real, the power of weaving an elaborate fictional story is indisputable when it comes to PR.

For those who want to give this controversial drink a try, you can find the recipe below. I intend to.

You can contact my NYC PR firm directly by clicking here.